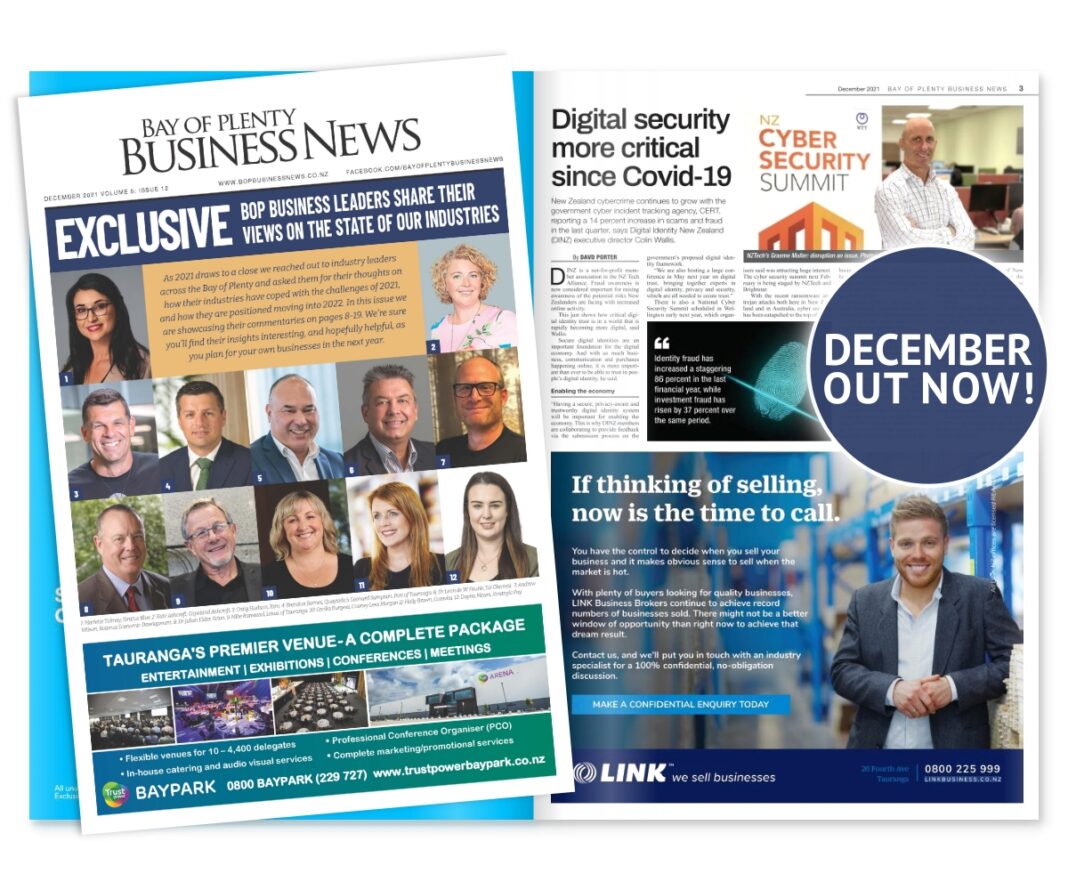 It is with considerable pride that Bay of Plenty Business News brings you our Christmas edition as we move toward six years of successful print and digital publishing.

Perhaps only those of us with long experience in the publications’ business can appreciate what a success this is for an independent newspaper. We owe a great vote of thanks to our dedicated readers and loyal advertisers.

This year, we decided to explore a slightly different format for our end-of-year issue and are looking back on the past year to reflect on the remarkable diversity of stories that we have covered.

As publisher Alan Neben notes in our introduction to this month’s cover story, we constantly have an ear to the ground to discover what topics are trending at any point in the year.

As we all know, this year has been one of bewildering change for Bay businesses as they have fought to keep going. In 2021 the mood of business has continually evolved as they have struggled to find new ways to thrive in difficult circumstances.

This month’s cover story simply confirms how well they have done under difficult and ever-changing circumstances.

While our primary focus is on business not politics, it is difficult to escape the fact that some of the bloom has gone off the Labour Government that was so triumphantly brought to power in the last election.

We all sympathise with other regions that have endured even more frustrating shutdowns than we have in the Bay.

But there is also considerable trepidation at what the potential downside may be if Aucklanders, in particular, decide that the Bay is the perfect location to explore their freedom – assuming it is granted – over Christmas.

Despite the enormous advantage of being able to spend millions of dollars on often patronising anti-Covid advertising – basically free advertising for the government – gaps are emerging in the government’s credibility.

One of the more glaring examples is of course the promised government acquisition of majority ownership of Three Waters assets, long held by local councils.

It is quickly dawning on the public that the proposed “consultations” on the subject are a mockery that have no real likelihood of being entertained by the government.

As noted by Tauranga Commission chair Anne Tolley in an October media release, one thing is crystal clear.

“What we’re hearing loud and clear from our communities is that they don’t understand the reforms and would like Tauranga City Council to reject them,” said Tolley.

Equally disappointing is the government’s often shambolic performance on the MIQ facilities, which have drawn widespread condemnation.

As National’s Chris Bishop noted in a recent announcement, the party’s survey on the subject has been one of its most popular ever, with more than 90,000 responses.

Says Bishop, MIQ made sense at the start of the pandemic. But now it’s just cruel and callous to stop fully vaccinated Kiwis coming home for Christmas when there are 5000 people alone in the North Island isolating with Covid (or close contacts) at home, he says.

‘It’s ludicrous that fully vaccinated travellers with no Covid go into MIQ, while people with Covid isolate at home in the community when they would be better off in quarantine.”

It is fair to say that this is politics as usual. And it must also be admitted that in opposition National has a long way to go as a viable alternative. Sadly, much of the blame for this lies with Judith Collins. Despite her undoubted talents, it is clear that she could not compete with Labour’s leader in the likeability stakes.

As we went to print the party came to its senses and punished her ill-judged attempt to demote Simon Bridges by ousting her from the leadership. We shall see if a new leader makes a difference.

I wish all of our readers a merry Christmas on behalf of Bay of Plenty Business News.