From the editor – October/November 2020 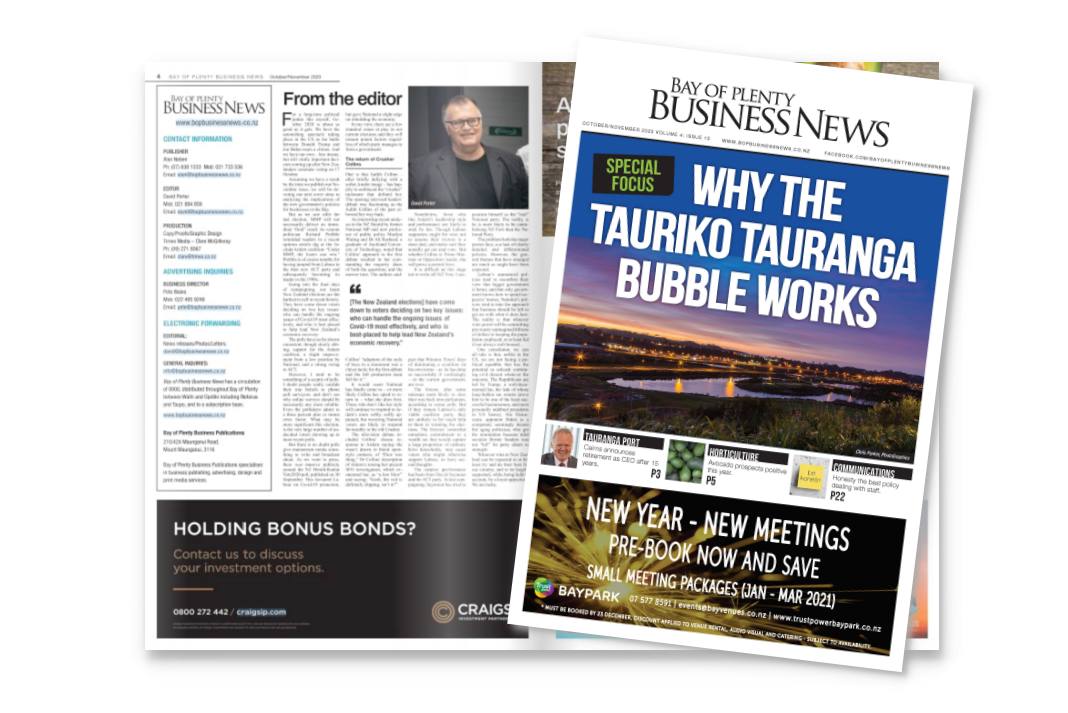 For a long-time political junkie like myself, October 2020 is about as good as it gets. We have the astonishing spectacle taking place in the US as the battle between Donald Trump and Joe Biden nears a climax. And we have our own – less insane, but still vitally important decision coming up after New Zealanders conclude voting on 17 October.

Assuming we have a result by the time we publish our November issue, we will be devoting our next cover story to analysing the implications of the new government’s policies for businesses in the Bay.

But as we saw after the last election, MMP will not necessarily deliver an immediate “final” result. As veteran politician Richard Prebble reminded readers in a recent opinion article dig at the Jacinda Ardern coalition: “Under MMP, the losers can win.” Prebble is of course notable for having jumped from Labour to the then new ACT party and subsequently becoming its leader in the 1990s.

Going into the final days of campaigning, our latest New Zealand elections are the hardest to call in recent history. They have come down voters deciding on two key issues: who can handle the ongoing issues of Covid-19 most effectively, and who is best placed to help lead New Zealand’s economic recovery.

The polls have so far shown consistent, though slowly ebbing, support for the Ardern coalition, a slight improvement from a low position by National, and a strong swing to ACT.

However, I tend to be something of a sceptic of polls. I doubt people really confide their true beliefs to phone poll surveyors, and don’t see why online surveys should be necessarily any more reliable. Even the polltakers admit to a three percent plus or minus error factor. What may be more significant this election, is the very large number of undecided voters showing up in most recent polls.

But there is no doubt polls give mainstream media something to write and broadcast about. As we went to press, there was massive publicity around the NZ Herald-Kantar Vote2020 poll, published on 30 September. This favoured Labour on Covid-19 protection, but gave National a slight edge on rebuilding the economy.

In my view, there are a few standout issues at play in our current elections and they will remain potent factors regardless of which party manages to form a government.

The return of Crusher Collins

One is that Judith Collins – after briefly dallying with a softer, kinder image – has happily re-embraced the “crusher” nickname that defined her. The opening televised leaders’ debate was fascinating as the Judith Collins of the past elbowed her way back.

An interesting recent analysis in the NZ Herald by former National MP and now professor of public policy Marilyn Waring and Dr Ali Rasheed, a graduate of Auckland University of Technology, noted that Collins’ approach to the first debate resulted in her commanding the majority share of both the questions, and the answer time. The authors said: Collins’ “adoption of the style of boys in a classroom was a clever tactic for the first debate and the full production team fell for it.”

It would seem National has finally come to – or more likely Collins has opted to return to – what she does best. Those who don’t like her style will continue to respond to Ardern’s more softly, softly approach, but wavering National voters are likely to respond favourably to the old Crusher.

The television debate included Collins’ classic response to Ardern saying she wasn’t drawn to blood sport-style contests, of “Poor wee thing.” Or Collins’ description of Ardern’s raising her ancient SFO investigation, which exonerated her, as “a low blow” and saying: “Gosh, the veil is definitely slipping, isn’t it?”

Nonetheless, those who like Ardern’s leadership style and performance are likely to stick by her. Though Labour supporters might be wise not to assume their victory is a done deal, and make sure they actually get out and vote. But whether Collins is Prime Minister or Opposition leader, she will prove a potent force.

[The New Zealand elections] have come down to voters deciding on two key issues: who can handle the ongoing issues of Covid-19 most effectively, and who is best-placed to help lead New Zealand’s economic recovery.”

It is difficult at this stage not to write off NZ First. I suspect that Winston Peters’ days of dominating a coalition on his own terms – as he has done so successfully if confusingly – in the current government, are over.

The Greens after some missteps seem likely to claw their way back into parliament, according to some polls. But if they remain Labour’s only viable coalition party, they are unlikely to be much help to them in winning the elections. The Greens’ somewhat unrealistic commitment to a wealth tax that would capture a large proportion of ordinary Kiwi households, may cause voters who might otherwise support Labour, to have second thoughts.

The surprise performance has been from David Seymour and the ACT party. In late campaigning, Seymour has tried to position himself as the “real” National party. The reality is he is more likely to be cannibalising NZ First than the National Party.

The problem both the major parties face, is a lack of clearly detailed and differentiated policies. However, the general themes that have emerged are much as might have been expected.

Labour’s announced policies tend to reconfirm their view that bigger government is better, and that only government knows how to spend taxpayers’ money. National’s policies tend to take the approach that business should be left to get on with what it does best. The reality is that whoever wins power will be committing previously unimagined billions of dollars to keeping the population employed, or at least fed if not always well-housed.

One consolation we can all take is that, unlike in the US, we are not facing a political squabble that has the potential to unleash continuing civil dissent whatever the outcome.

The Republicans are led by Trump, a well-documented liar, the leak of whose long-hidden tax returns prove him to be one of the least successful businessmen, and most personally indebted presidents in US history. His Democratic opponent Biden is a competent, seemingly decent but aging politician, who got the nomination because mild socialist Bernie Sanders was too “left” for party elders to stomach.

Whoever wins in New Zealand can be expected to at the least try and do their best for our country, and to be largely supported, while being held to account, by a loyal opposition. We are lucky.