Taking the leap into public relations 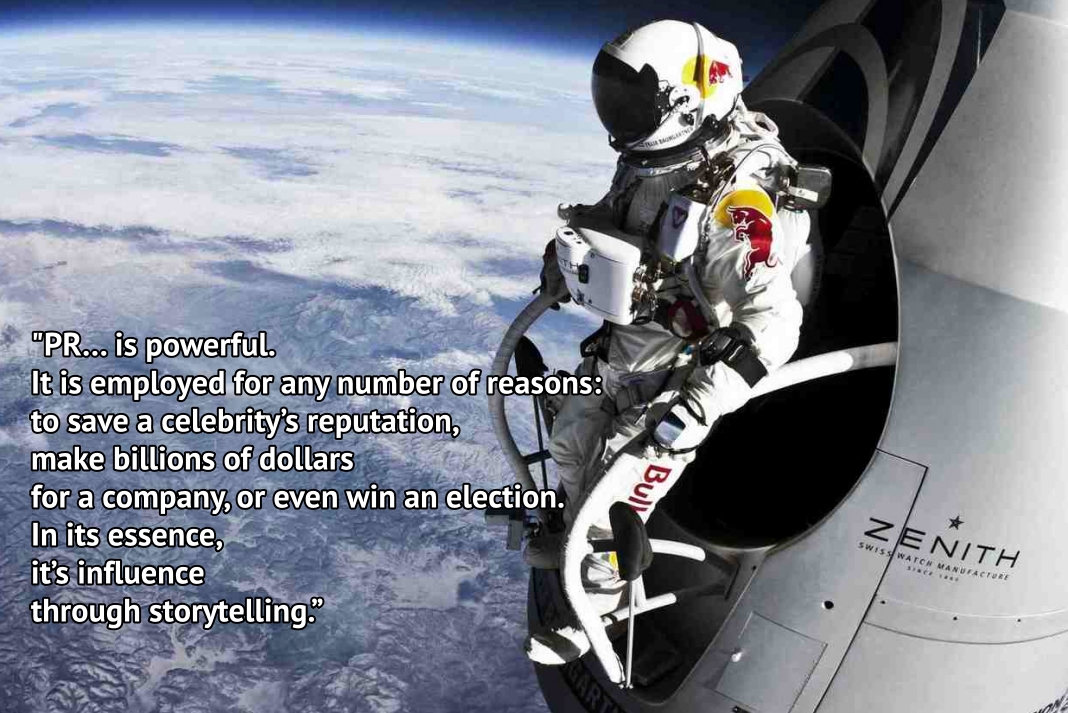 In 2012, Austrian daredevil Felix Baumgartner ascended in a helium balloon for two and a half hours, reaching “the edge of space” at an eye-watering height of 39km. Then, he jumped.

The jump was broadcast on YouTube across the world. Falling from the stratosphere, he reached a record-breaking top speed of 1,357.64km/h, smashing the sound barrier, but spinning wildly out of control.

Felix survived, managing to regain stability and deploying his parachute after over four minutes of freefall. He landed – incredibly – on his feet, safely in New Mexico.

Why did he do this? To test the limits of human capability? Yes. To go down in history? Yes. But first and foremost, he risked his life in this death-defying stunt… to sell energy drinks.

The jump was all part of the Stratos Project. Conceived by energy drink company Red Bull, whose tagline is “gives you wings” (see what they did there?), it will be remembered as one of the boldest PR stunts ever undertaken.

Red Bull is renowned for its PR mastery. It’s widely reported that the company reinvest 1/3 of their profits back into marketing, with the Stratos Project alone costing $65 million. This is a staggering sum of money. So why do they do it?

Simply because PR, also known as public relations, is powerful. It is employed for any number of reasons: to save a celebrity’s reputation, make billions of dollars for a company, or even win an election.

In its essence, it’s influence through storytelling. By predicting and understanding the public’s psyche, a person or organisation uses various communication channels to build a relationship with the public, and uses that to frame people’s perception of them.

This can take many forms – a social media trend such as the Ice Bucket Challenge, a big stunt like Red Bull’s Stratos Project, brand partnerships such as New Zealand Rugby’s recent deal with INEOS, or celebrity affiliation, like when Jacinda Ardern picked up US talk show host Stephen Colbert from the airport when he visited New Zealand. She was interviewed by him on the drive home, and then invited him to a BBQ at her house with singer Lorde.

And the results speak for themselves. Eight million people watched Felix’s jump live and more than three million Tweeted about it.

It made headlines across the world, turning Felix into an overnight celebrity. He set new records and contributed valuable research to the scientific community.

It’s the kind of publicity one can only dream of. But what made it a success? Money obviously helped, but plenty of organisations have a lot of money and never achieve this level of buzz. So, what else?

Firstly, it was cool. Red Bull know their target audience: young people. Extreme sports and websites like YouTube are something this group gravitates towards.

It also had worth, providing real, useful research into the effects of space travel and extreme environments on the human body. For even the most sceptical of people, they can’t argue with those real-life contributions.

Next, they hit the media sweet spot of doing the “first, fastest, highest”. News stories thrive off these kind of headlines and what makes a story stand out. It was also exceptionally visual, lending itself perfectly to TV, online and print.

Finally, it was bold. Red Bull literally shot for the stars. It was captivating, brave, full of drama, and inspiring. Who could turn their heads away from that?

While we don’t all have Red Bull’s budget, we can still embody these principles when diving into our own PR journey. In any circumstance, we should understand our audience and tap into what makes them tick.

We can also do something of worth, giving back to our community and contributing to the world, as well as looking into what’s new and innovative, even if just on a small scale. And we can be bold, setting high standards for ourselves and not settling for the mediocre.

By investing in PR, we not only raise awareness, but we can control the narrative. PR attracts media attention, builds relationships, and persuades people. When done right, you could still be remembered decades later.

So, are you ready to take the leap?