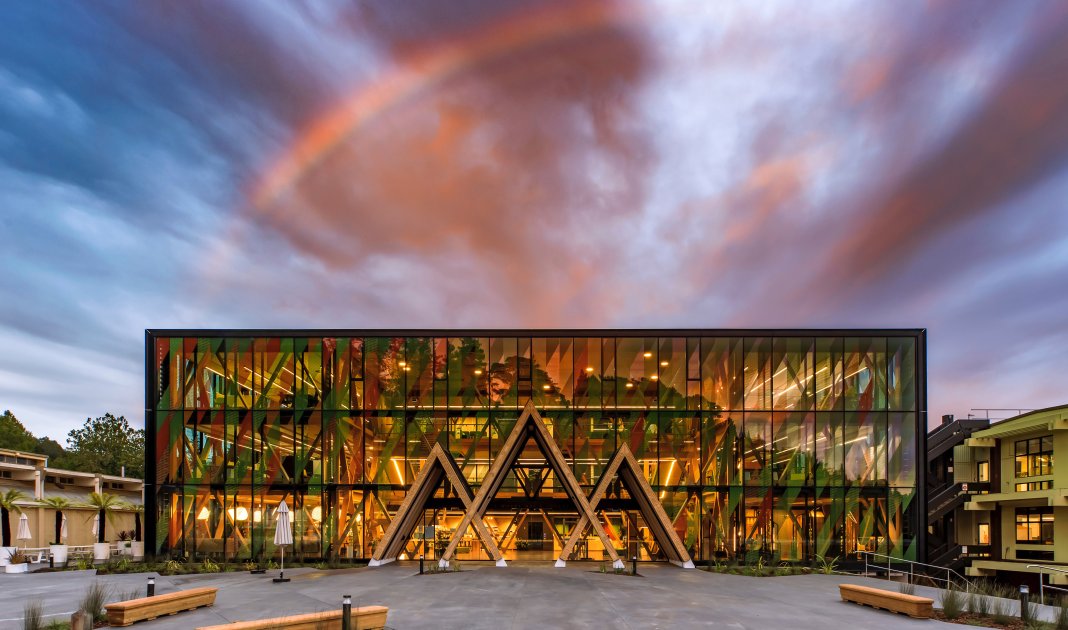 Elder said the campus redevelopment programme is an upgrade to the site and delivers Scion fit-for-purpose facilities that reflect the world-class science we do here.

“Te Whare Nui o Tuteata is the centrepiece of the campus – a place to share information about all the things that can be made from trees, which is just about everything you can make from petrochemicals, and to get people thinking about what is possible.

“New Zealand needs to get started on transitioning to a circular bioeconomy which offers significant opportunities for New Zealand’s future through competitive advantages on a world stage.

“We see this unique, stunning building as the catalyst by bringing scientists, business, industry and government together.”

Scion’s landmark building is unusual in that – in keeping with Scion’s mandate to foster forest products – it is mostly a wooden building.

Elder said that constructing with sustainably grown timber was an obvious choice for Scion and has provided a very attractive and functional building.

We see this unique, stunning building as the catalyst by bringing scientists, business, industry and government together.

“In New Zealand, there are lots of opportunities for sustainable buildings using
engineered wood in the medium rise space.”

Te Whare Nui o Tuteata contains 454 cubic metres of wood. It takes only 35 minutes for New Zealand plantation forests to grow that volume of wood, which will continue to store carbon for the life of the building. Altogether, the building stores around 418 tonnes of carbon dioxide – equivalent to the amount of carbon dioxide that would be emitted by 160 return Auckland to London flights.

Cole Weston, the site project manager, who worked for main building contractor Watts & Hughes, noted that the obvious point of difference of the building is that it is a 90 percent timber structure.

“Engineered timber is fundamentally in the vein of Scion and what they want to showcase,” said Weston.

“It was definitely challenging – but it’s worked out really well. Timber is warm – you walk into it and it has a large atrium, which creates a sense of space.”

The building is 2000 square metres with the first and second floors open to the large, light-filled atrium.

Adam Dwen, a senior associate with RTA Studio, the architects who worked on the
project, said the challenges creating the building included the initial site planning within the existing campus, through to the double skin façade and the highly innovative aspects of the timber diagrid structure.

Dwen and his colleagues at RTA Studio, as well as Irving Smith Architects, noted some of the following points.

“As a new building inserted into an existing 50-year-old campus, the building achieves a lot in improving the sprawling site’s key adjacencies,” said Dwen.

He also said that the new building creates a prominent new campus arrival point at the end of Tītokorangi Drive, improving the visitor arrival experience and strengthening the public interface for Scion.

As a Crown Research Institute that specialises in technology development for the forestry industry, Scion drove the need to showcase wood as the building’s material of choice. Therefore, the key to the architecture was the resolution and expression of the timber diagrid structure.

“The three level, laminated veneer lumber structure, provides the gravity and lateral framework and demonstrates that timber structural buildings do not need to be designed like steel and concrete buildings,” said Dwen.

The mantra among the wider design team that arose through the process was, “the diagrid is king”, he said. The endless design decisions that are made in a project like this always take into consideration the effect on the diagrid and the intent for a clear expression of the timber structure throughout.

Dwen says the spatial form, structure and envelope are also integral with the building’s sustainability initiatives. Structural elements provide an organising element for services reticulation and the floor plate arrangement, and together with the double skin east facing glazed façade, work intrinsically with the mixed mode ventilation strategy.

Extensive glazing offers an abundance of natural light to limit active lighting with the design strategy of the facade pattern evoking a leafy forest, as well as being a climate modifier, vital for the building’s thermal strategy. Used in conjunction with low-e performance glazing to regulate the internal temperature and loads, the pattern increases density to the north and western facades and alters in gradient up the height of the building to help regulate internal temperatures.

As assessed, the new Scion building achieves embodied carbon zero at the time of completion due to the extensive use of timber. Furthermore, the building was assessed to achieve the 2030 target set by the Royal Institute of British Architects of 500kg carbon dioxide per square metre for whole of life carbon. “It significantly contributes to New Zealand’s carbon-zero future,” says Dwen.

“The carbon-zero goal is achieved through the use of engineered products made from sustainably grown pine and putting more thought into the operational characteristics of a building.”

Michael Perkins, a site contracts manager for Watts & Hughes, says the most challenging aspect of the build was its mainly timber construction. “We’ve got CLT (cross laminated timber) creating a floor structure that has been laminated three ways,” said Perkins.

He acknowledged that it had been a difficult structure to build. One obvious factor was that when timber gets wet it tends to swell, making it more difficult to control.

“Everything was drawn up and manufactured to shop drawings,” he said.

“It was brought to site and fitted together like a jigsaw puzzle – and it did.”

Perkins noted that, for example, the windows that went on at the front came down to a very tight V and fitted very well. The entire project took around 16 months to complete.

“I think most of the challenge was in getting the diagrids standing and braced,” he said.

With the large atrium in the centre, there was nothing to actually prop the diagrids off and the site team had to work through various scenarios of how they were going to prop it and hold it.

“It all fitted together nicely and we’re very happy with the result.”

A $2.5 million grant from the Bay of Plenty Regional Council’s Regional Infrastructure Fund helped get the multi-million-dollar project underway.

This contribution was part of the contestable Regional Infrastructure Fund process, says chair Doug Leader. The fund was targeted at economic development, and the Scion building fitted the bill by demonstrating significant potential for improving the value of forestry and wood-derived products and services. Te Whare Nui o Tuteata could help create thousands of jobs and increase export earnings by up to $1 billion according to NZIER research.

Elder said that Scion and its predecessors, have a proud history of innovation on this site, and Te Whare Nui o Tuteata, believed to be a world-first for a wooden diagrid building of its size, continues the innovation journey.

Sheryl Kirner of RDT Pacific is a highly experienced senior project manager and associate director based in Rotorua. Kirner who worked on the building, told Bay of Plenty Business News that Scion intended the building to be a collaborative, easy to access space for Scion and Te Papa Tipu Innovation Park tenants that encourages industry and science co-innovation while also serving as a welcoming gateway for visitors.

A $2.5 million grant from the Bay of Plenty Regional Council’s Regional Infrastructure Fund helped get the multi-million-dollar project underway.

A visually striking structure, Te Whare Nui o Tuteata demonstrates the latest in engineered timber products and manufacturing techniques within its bold and innovative structural form, while using products that are designed for our climate and meet our preferences for sustainability and environmental performance.

It also links to laboratories and testing facilities.

Developed in response to the local climate, typical office heating and cooling needs are significantly reduced, while further enhancing the connection to the forest.

Leslie Eckard, an electrical engineer working for long-time Scion consulting engineers PCS Ltd, told Bay of Plenty Business News the relationship dated back to the days when PCS Ltd encoded the whole live voltage infrastructure of the campus through to miscellaneous other projects.

“We’ve done numerous buildings over the years and I believe what makes this
building special is that it is mainly timber with a beautiful laminated timber diagrid frame structure.”

“The services we provide are lighting and telecom distribution throughout the building,” said Eckard. “To make a building look good and meet the required standards for a good workplace you have to provide good light levels. The way we planned it we basically selected a colour temp (around 3000 kelvin) in most areas. The idea was to make the timber feel [like] wood.”

In the workspace areas the team used 4000 kelvin, a cooler white light, which makes the occupants feel good.

“The design philosophy when I looked at it suggested we should not put much lighting outside, for a number of reasons,” he said.

“We’ve got the redwood forest next door and we didn’t want to deter any wildlife with a massive exterior light source. The idea was to make it like glow like a lantern – for everything to emanate from inside out.”

The contractors wanted to emphasize and blend in with the architecture, he said.

A highlight for Eckard are the Matariki-inspired lights in the atrium ceiling. The feature aims to simulate the Matariki star cluster. Different sizes of circular lights bring a sense of depth to the environment, and programming sequences creates the impression the lights are glittering in the sky.

Elder: “We are creating a unique and dynamic environment that will promote innovation, commercialisation and collaboration by bringing Scion staff and industry closer together.

“Engaging with the public is important too, and we will be opening up parts of the campus to our neighbours, local community and tourists,” said Dr Elder.

Are you timing your marketing right?

Make sure you compare apples with apples