Scientists team up for war on stink bug

Kiwi and Italian scientists are working on ways to stop the brown marmorated stink bug (BMSB) rampage through one of Europe’s major fruit bowls.

Meanwhile, a Summer campaign to raise public awareness in New Zealand is ramping up.

Professor Max Suckling, Plant and Food Research, and an Auckland University senior scientist, has spent this summer working alongside his Italian peers in Trento, northern Italy helping better understand how to control the BMSB, which has already decimated that country’s Eu300 million pear industry.

Bay of Plenty based-Kiwifruit Vine Health (KVH) has been at the sharp end of a joint awareness campaign benefiting from horticulture’s Government-Industry Agreement. This was designed to get better alignment between government and the sector over dealing with biosecurity risks.

KVH communications advisor Lisa Gibbison said the campaign has also worked as closely with those in the shipping and logistics sector, as it has increasing wider public understanding of the bug’s possible impact on New Zealand’s $5.5 billion horticultural export sector.

Last season’s campaign generated a healthy 930 calls on the 0800 number from public concerned they had identified a BMSB – double the year before. There were also over 6 million online impressions on the website.

But for the scientists in Italy this Summer, the battle is more immediate and time-sensitive.

Ioriatti first identified the bug only three years ago, and within a year the first impact on crops was being noticed.

Today the bug is poised to penetrate Trento’s 10,000 ha of apple orchards, which supply 70 percent of Italy’s crop, and 15 percent of the European Union’s.

The bug injects an enzyme into fruit before it is ripe, discolouring its flesh, causing it to fall early or making it unsalable.

Up to 70 percent of kiwifruit on vines can be affected and spraying is proving less than 50 percent effective.

Netting over orchards helps reduce numbers, but juvenile bugs are able to penetrate these. And even covered orchards require spraying.

So far New Zealand has dodged any major incursions. But isolated detections of bugs have been made, putting biosecurity officials and orchardists on high alert.

Last November a car-carrying ship was refused entry due to numbers of BMSBs being detected on board before berthing.

Suckling told Bay of Plenty Business News that  the lessons learned from his work this summer for New Zealand from Italy are very real, and the bug’s impact is chilling.

“We have learnt that BMSB is not limiting itself to fruit,” he said.

“It is drawn to maize as soon as cobs start to tassel, and then crosses to mulberry trees, and onto soy beans too if they are there.”

That highlighted how vulnerable regions with pastoral and horticultural production like Bay of Plenty, Hawke’s Bay and Nelson would be to it establishing here, he said. 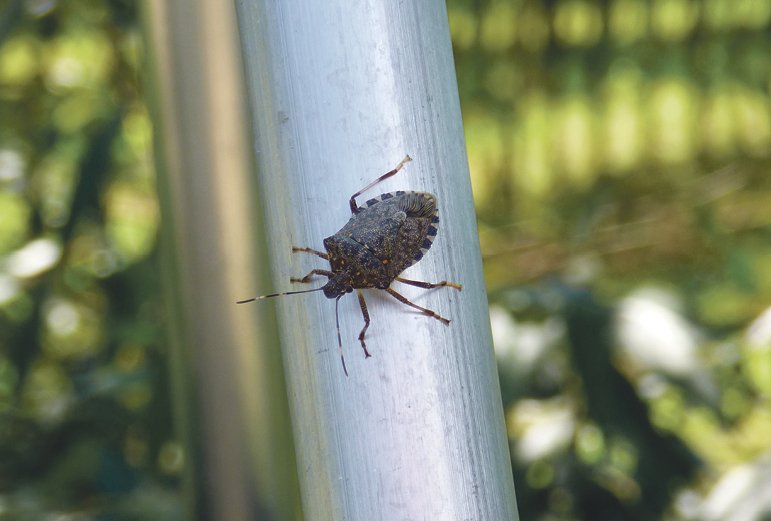 “This is definitely not just a horticultural risk for New Zealand – it’s a pastoral sector risk as well. So any approach in trying to deal with it involves a broad, area wide approach, well beyond any one crop or localised area.”

He has had experience dealing with similar type outbreaks, managing the successful response to the painted apple moth outbreak in Auckland in 1999.

More recently, he and his colleagues have used drones to drop sterilised male codling moths around Hawke’s Bay to successfully reduce moth populations 10-fold on apple orchards there.

Suckling’s work is also focusing upon trapping methods that may prove effective, including pheromone trapping and the relatively new trapping science of biotremology.

“We have learnt that BMSB is not limiting itself to fruit.”
– Max Suckling

This involves using synthesised insect mating calls transmitted as a vibration through orchards to draw insects of one sex to the false call, and into a trap.

While it is early days yet, Suckling is optimistic about the technology and is hoping to gain Ministry of Business Innovation and Employment funding to continue the research work started in Italy through the New Zealand summer.

After a career spent researching and dealing to pest incursions, Suckling said he had a grudging respect for the BMSB.

“I have seen a lot, and this is definitely one of the worst. It has such a broad and rapid impact on crops, and we need all the time we can get to try and deal with it.”