From the editor: July/August 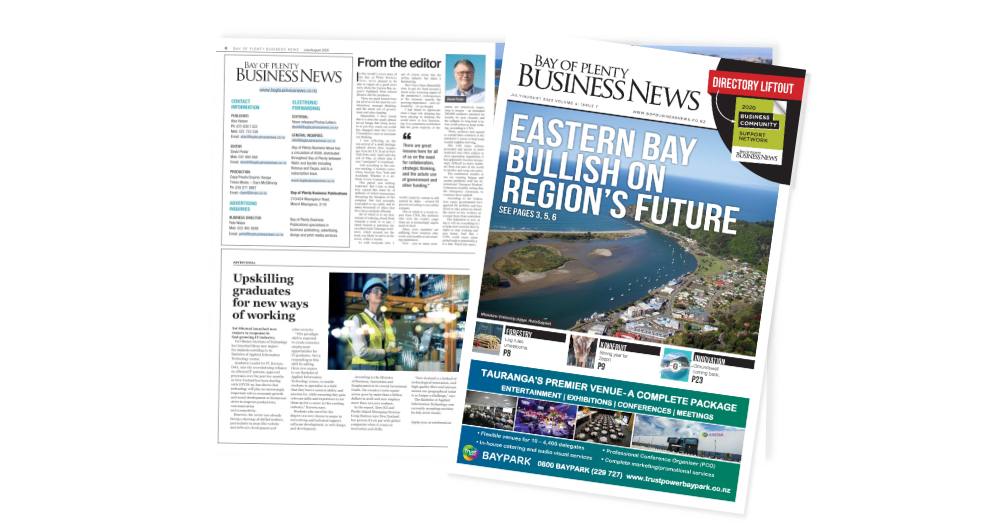 In this month’s cover story of the Bay of Plenty Business News, we’re pleased to be able to report on a good news story about the Eastern Bay region’s fightback from natural disaster and the pandemic.

There are great lessons here for all of us on the need for collaboration, strategic thinking, and the astute use of government and other funding.

Meanwhile, I have found that it is often the small, almost trivial things that bring home to us just how much our world has changed since the Covid-19 pandemic came to dominate our thinking.

I was reflecting on the non-arrival of a small package ordered almost three months ago from the US. It sat in New York from early April until the end of May, at which time it was “consigned” to Auckland. And according to the courier tracking, it remains somewhere between New York and Auckland. Whether it is airborne or not, I cannot say.

This parcel was nothing important. But I hate to think how typical this must be of millions of failed transactions disrupting the business of the company that had promptly responded to my order, and to many thousands of others that have been similarly affected.

There are great lessons here for all of us on the need for collaboration, strategic thinking, and the astute use of government and other funding.

All of which is to say that, instead of ordering a book from Amazon a week or so ago, I opted instead to patronise my excellent local Tauranga bookstore, which assured me the book was likely to arrive at the worst, within a month.

As with everyone else, I am of course aware that the airline industry has taken a hammering.

But I have been shamefully slow to get my head around a much more worrying aspect of the pandemic’s consequences at the moment, namely the growing importance – and vulnerability – of sea freight.

I had failed to appreciate what a huge role shipping has been playing in keeping the world more or less functioning. It is sometimes overlooked that the great majority of the world’s trade by volume is still carried by ships – around 80 percent according to one online estimate.

But as noted in a recent report from CNN, the seafarers who crew the world’s cargo ships are in increasingly urgent need of relief.

Many crew members are suffering from isolation after weeks and months at sea awaiting repatriation.

Now – just as many economies are tentatively beginning to reopen – an estimated 200,000 seafarers stranded for months by port closures and the collapse in long-haul aviation could refuse to keep working, according to CNN.

Many seafarers had agreed to extend their contracts at the pandemic’s outset to help keep needed supplies moving.

But with many airlines grounded and access to ports restricted and often subject to strict quarantine regulations, it has apparently become increasingly difficult to move seafarers from one part of the world to another and swap out crews.

The continuous months at sea are creating fatigue and mental problems with the International Transport Workers’ Federation recently noting that the emergency extensions to contracts have expired.

According to the Federation, many governments have ignored the problem and have failed to take action to classify the crews as key workers and exempt them from restrictions.

The federation is now saying it will do everything it can to help crew exercise their legal rights to stop working and return home. And that, says CNN, could cause slumping global trade to potentially grind to a halt. Watch this space.