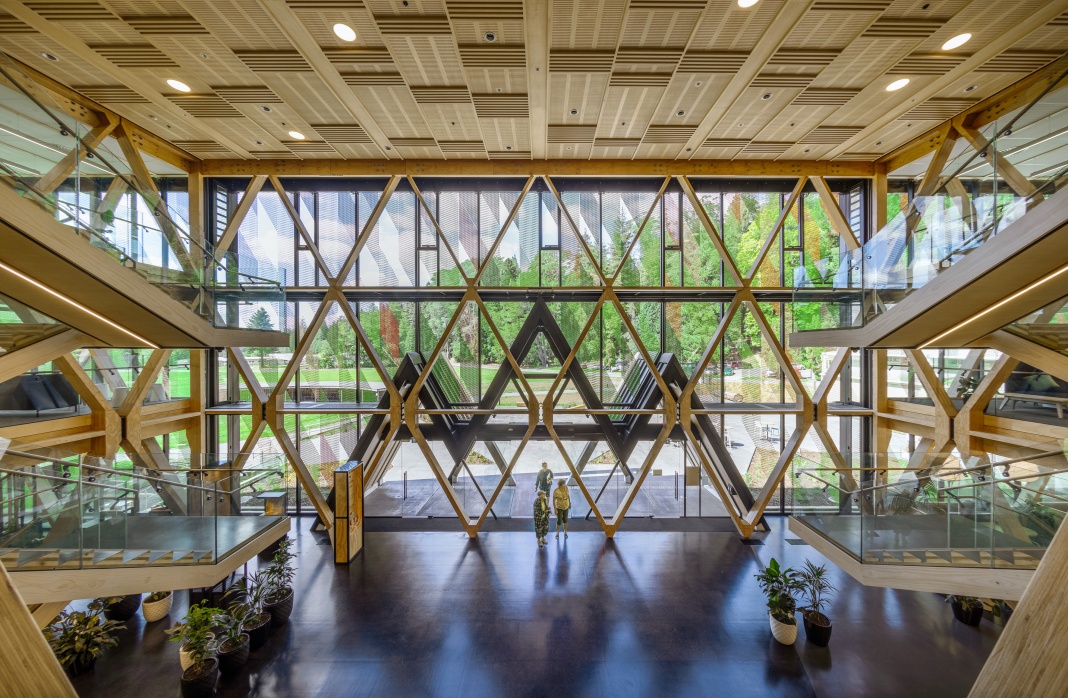 The Rotorua building is believed to be a world-first diagonal-grid (diagrid) timber structure for a three-storey building, while also being embodied-carbon neutral.

Its name and design feature stories of mana whenua, Ngā Hapū e Toru, and the building was designed by RTA Studio in collaboration with Irving Smith Architects.

“If you look from the outside, you see a simple building with fascinating colours that match the forest and at the entrance, engaging Māori carvings which tell the story of mana whenua. But, architecturally, it is when you walk inside that magic happens… the contrast between the simple aesthetic outside and the shock of entering a huge void hits. You see striking timber structure, architectural lines and natural materials in harmony with each other – that is what is so impactful.”

“Trees sequester carbon from the atmosphere while they’re growing, and as long as the wood is in use that carbon is stored, so it’s not going back into the atmosphere. If the timber is sustainably certified it means that the forests are re-growing after each harvest, and the carbon sequestration cycle continues.”

Te Whare Nui o Tuteata stores 418 tonnes of CO2-eqv for the life of the building, which is the equivalent of one person flying 160 times return from Auckland to London.

“We calculated that the timber that we see here in the Te Whare Nui o Tuteata structure has been regrown in 35 minutes by New Zealand planted forests,” said Stocchero.

“This is a compelling story about the capacity of New Zealand forests to provide the timber we need for future developments.”

RTA Studio executive director Rich Naish said the team was honoured to have been recognised at the World Architecture Festival Awards.

“In these weeks after COP26 the recognition of this building and the innovation it proposes for sustainability and carbon neutrality in the building sector could not be more relevant. We are proud to be able to make a global contribution to the climate emergency,” he says.

“Tackling climate change requires working together and this building provides an invitation to ‘come walk in our forest’ and see how we can all better participate with the environment.”

Scion chief executive Dr Julian Elder said he believed the accolades had been wonderful, but acknowledged there was another part that resonated most.

“From my perspective, the people we’ve had coming into Te Whare Nui o Tuteata this year – visitor, industry and community groups – those who wander into the café and spend their time here – it’s their positive and engaged feedback with the building which is important for Scion.”

Other highlight awards in 2021 have included Property Council NZ Awards of Excellence, Best of Best Masterprize Award for Green Buildings at the USA Architecture Masterprize Awards, and The Building Award at the Indo-Pacific INDE Awards in Sydney.

Te Whare Nui o Tuteata opened in January 2020 and was gifted its name by Ngā Hapū e Toru who hold mana over the whenua.