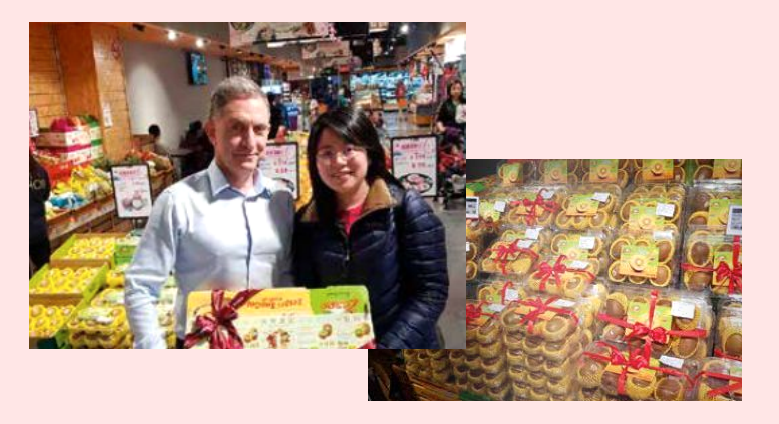 China’s appetite for kiwifruit appears to be continuing unabated. Kiwifruit margeting entity Zespri is anticipating sales of almost 30 million trays of fruit this season to mainland China, with 20 million of those being SunGold.

Ivan Kinsella, Zespri China’s corporate affairs manager, told Bay of Plenty Business News during a visit to Shanghai that the amount will mean China now accounts for 15 percent of the company’s sales.

With SunGold orchards coming on stream at the rate of an additional 700 ha per year, much of the anticipated growth will be coming from the higher value SunGold variety.

Kinsella acknowledged Zespri’s success in China today was in part the silver lining of yesterday’s cloud, when it experienced issues around importation documentation in 2011. That had resulted in the imprisonment of a former employee and Zespri assuming the entire importation role from shipping to distributor, becoming the “importer of record” in 2016.

Kinsella said a major upside of having more integrated control over importation had been a significant reduction in delivery times, shortening from a week to as little as four hours across the wharf in China.

Zespri has four high turnover key accounts that receive particular priority for delivery, fruit size and delivery dates. Marketing programmes in stores and in media are also being organised jointly with Zespri.

The Chinese consumer market is undergoing a massive upgrading in terms of what consumers are buying, and the food sector is no different.

The urban supermarket environments in Tier 1 cities like Shanghai and Beijing are highly sophisticated and are typically supported by online purchase apps that are delivering operators increasingly rich amounts of data on consumer expenditure and behaviour.

Estimates are Chinese consumers are buying up to 40 percent of all items including food online today, significantly ahead of most western nations, and well up on New Zealand which sits at under 10 percent.

Kinsella said SunGold was proving a favourite with Chinese consumers who identify with the fruit, are familiar with it, know it is healthy for them and enjoy the taste profile it has.

Green tends to be popular with urban fitness seekers who buy it for its high vitamin C level, health benefits and lower price.

Zespri has recently adjusted its branding by adopting the Chinese characters that spell “Zespri”, pronounced “Jiapei” in Mandarin. This was to further aid uptake by Chinese customers who struggle to pronounce Zespri, with the three consonants all together.

“We are using it more and more in our advertising,” said Kinsella.

“If consumers can pronounce it comfortably, and experience the fruit, it’s all part of educating them about a quality brand and their loyalty in the future will increase.”

He acknowledged there was a continuing delay with the much touted red kiwifruit, which had enjoyed positive taste tests in Singapore and New Zealand last year.

“The issue is not around the fruit’s taste but around its shelf life, which we are still working on to try and improve.”