One of the most startling elements of the Tauranga by-election that will take place later in June is the sheer number of candidates.

The inescapable conclusion – since, to be kind it, would seem likely that few of the candidates stand a chance of winning very many votes – is that many are simply attempting to raise their visibility ahead of the eventual return to local government democracy when the Tauranga commissioners leave and the city returns to local body elections. (See candidate box)

Tauranga City Council’s commission has announced that it wants three key infrastructure priorities to be top of mind for candidates at the forthcoming parliamentary by-election.

These are Hewletts Road/Hull Road/Totara Street improvements, State Highway 29 grade separation and the Port of Tauranga extension, which commissioner Anne Tolley said were all vital and need to be accelerated to get the city moving.

“Industry, business groups and the Western Bay of Plenty’s councils all agree that these projects are pivotal for the region, simply because they will have the biggest impact on our economy and residents over the next decade and beyond.”

By the time some of our readers get to this feature, the results of the Tauranga by-election should be known. Nonetheless, we thought it was important to record the event as a significant development in the city.

It is very encouraging to see a good slate of candidates putting themselves forward. We have also noted strong interest and attendance at the various candidates’ meetings and debates organised around the by-election. 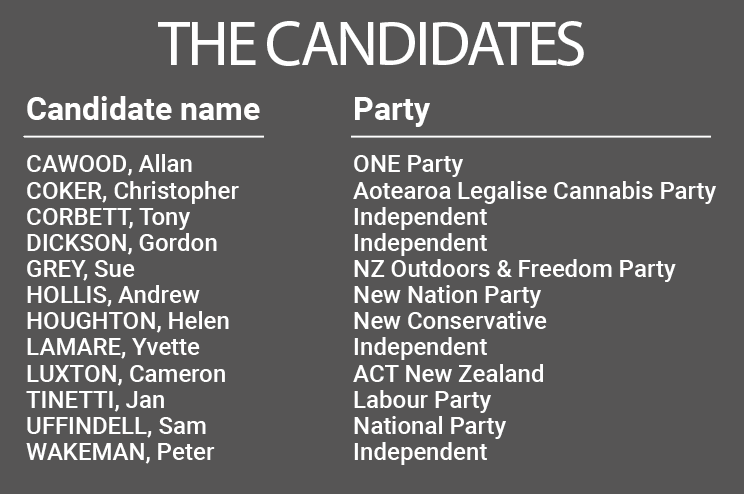 We describe the by-election as a surprise because, frankly, it was. Simon Bridges has served 14 years as MP for the city. A former queen’s counsel of Maori descent, he had forged a solid reputation in Wellington. He has been ably supported by Western Bay National MP Todd Muller.

At one point recently a leader of the National Party, Bridges bowed out – wisely in my view – at the latest leadership round and gave way to new broom Christopher Luxon.

At this point National is ahead in the polls, and there is a reasonable expectation the party might win the next country-wide election over Labour. That would have meant at the least a front bench position for Bridges.

However, speaking with Bridges after his retirement announcement, it was clear he felt that 14 years serving in Wellington, often away from his young family for long periods, was long enough and that he wanted a new challenge.

That has come in the form of taking up the role of chief executive of the Auckland Chamber of Commerce from long-serving Michael Barnett, who is standing down. Bridges will also be moving to Auckland though he plans to maintain his key contacts in Tauranga.

Auckland Chamber chairwoman Charlotte Parkhill confirmed that Barnett would step down from the role in August, but would remain involved in the organisation, driving key projects including Firststeps, a mental health initiative with government focused on business, the Regional Business Program, the NZ Chamber network, and his role with the International Chamber.

Barnett was appointed chief executive in 1991 and is generally seen as having done a good job in asserting the organisation’s profile. When he took over, the chamber had a smaller staff and a membership that tended to reflect larger business, but he has changed that perspective, growing the chamber significantly.

Barnett spoke warmly of Bridge’s imminent arrival and the usefulness of his significant contacts in Wellington and throughout the country as a result of his political role.

Parkhill said the chamber board has been consistently impressed with the voice that Michael had given to business and his entrepreneurial approach to issues faced by the sector.

However, Prime Minister Jacinda Ardern has downplayed her party’s chances of winning the seat, given it is generally seen as a safe National seat.

In addition, as the accompanying box reveals, there are a further nine candidates standing.

One bright spot on National’s horizon is that semi-retired NZ First frontman Winston Peters, after hinting he might stand, opted at the last minute not to do so.

According to senior NZ Herald political writer Thomas Coughlin, Bridges’ valedictory speech drew the curtain on a political career that spanned more than a few scandals. The reporter referred to Bridges’ combination of unique skills.

“He’s very smart. He went to Oxford and worked as a Crown Prosecutor, so he definitely has book smarts. But he’s also got this scrappy West Auckland street-fighter vibe as well,” wrote Coughlan.

“Here’s someone who can outwit with street smarts in an all-out political scrap, but he also happens to be a policy brain capable of hitting you with book smarts too. Bridges also came across as a pretty down-to-earth, normal guy. But behind that, you have a very clever, calculating politician.”

One of the key points Bridges made in his valedictory speech and in his conversation with Bay of Plenty Business News, was that you “have to follow your gut a bit more”.

This paper attended a number of candidates’ meetings, including that organised by the Tauranga Chamber of Commerce, in which Uffindel, Luxton and Tinetti took part, along with an interesting panel of debaters who threw questions at them.

The panel was made up of Mary Hill – Partner Cooney Lees Morgan, Bridgette Tapsell – Whare PR, and Jamie Lunam – Jenkins Freshpac, with Will Johnston coordinating the debate.

Clearly all three of the candidates we heard were thoroughly grounded in key local issues.

Anne Tolley said some of the early commentary from by-election candidates had been “out of touch” with the real needs of the constituency.

She said the debate was “an opportunity to discuss and promote actions which will have huge long-term benefits for Tauranga.” She emplored them to “keep our electoral conversations grounded and focused on real world solutions to real world issues.”