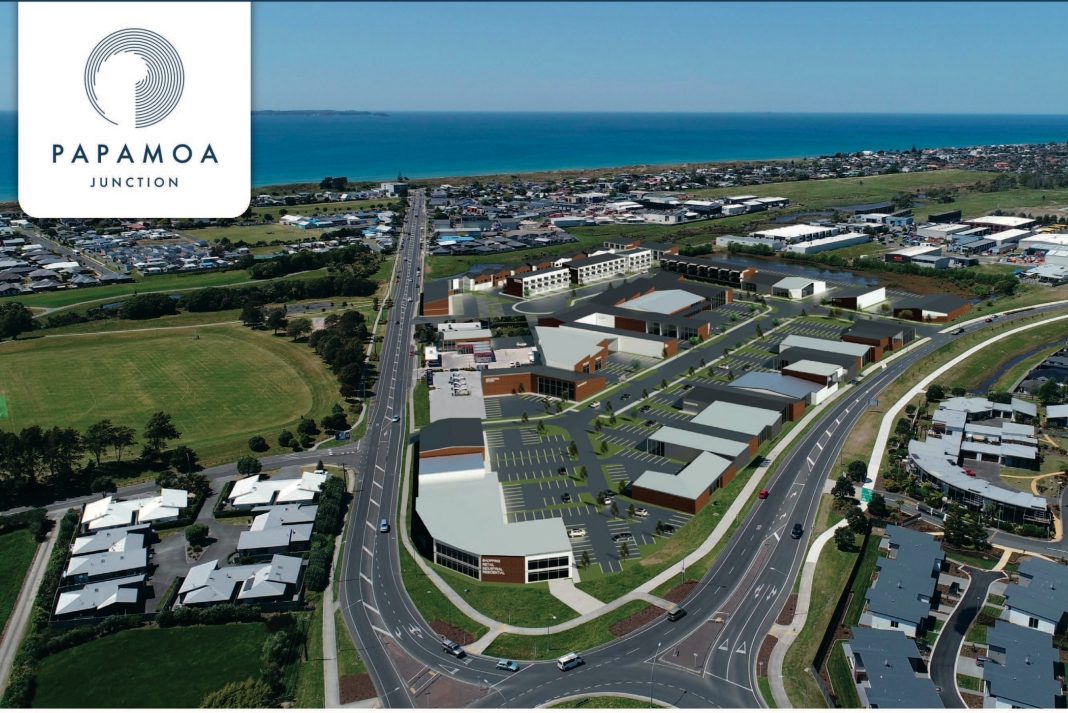 Carrus – one of the country’s biggest land developers – is now underway with development of its mixed residential/light commercial subdivision: Papamoa Junction.

Carrus is fresh from completing its successful development at The Lakes in Tauriko, and is also engaged in other major developments around the North Island, namely in Wellington and Taupo.

Nearer to home base it is developing the Nga Roto Estate in Five Mile Bay, in a prime location of Taupo, which will become a modern residential development and where sales were “going berserk”, said Scott Adams, Carrus Managing Director.

Adams is also Managing Director of all of the company’s residential land developments and commercial development companies. He noted that with The Lakes now finished, there was a strong desire to push ahead with Papamoa Junction, which has been owned by a Carrus- managed entity for the last 11 years.

“The problem with Tauranga is that it’s very difficult to secure developable land,” said Adams. “It’s either unavailable or if it is available, it’s unaffordable,” he said.

“Every block that we’ve looked at [locally] in recent times is constrained in some way, whether it’s because of restricted access, poor zoning, covenants that prevent further subdivision, or natural hazards like flooding and liquefaction, or simply the cost of the
land.

“If it wasn’t difficult enough for developers to have all those things going against us, there’s also the RMA [Resource Management Act], which has morphed into a bipolar piece of legislation that is long overdue a serious reform.

“Is it an environmental act or is it an urban development act? Time has shown that it cannot successfully be both. If Tauranga has any chance to grow and thrive then the current government needs to simplify or remove the RMA and replace it with fast-track legislation.”

Councils and landowners have considered options for urban development at Papamoa East’s Te Tumu for years and that potential 760ha site is now part of the SmartGrowth strategy. But even in a best-case scenario, it would be at least three years before any development would occur at Te Tumu, said Adams.

“Everyone knows that Tauranga has a major problem with housing supply – the city needs an additional 40,000 houses over the next 30 years in the city just to keep up with the population growth. Where is this going to come from?”

Future Urban growth areas Te Tumu and Tauriko West are still several years away from starting. Adams said that every Tauranga citizen had to get in behind both these plan changes when they finally get notified in 2021, because these areas will help ease housing demand and smooth increasing house prices.

As designed, Papamoa Junction comprises 41 mixed-use commercial lots and two residential super lots with Barrett Homes underway with designs for approximately 60-70 two and three-storeyed townhouses ranging from 145sm to 160sm adjacent to the Wairakei Stream reserve. Residents will have a straight line walk to the Papamoa Beach, said Barrett Homes’ Mike Bryant, who is co-owner of the company with Grant Eynon.

“There is lots of residential development in the area, and schools just up the road and an amazing local community,” said Bryant. “We think it’s going to be a development that is definitely in demand in that area.”

Bryant said the overall “feel” of the development would be “timeless” and the homes would have a quality look in keeping with the surrounding area.

Barrett will also be building a small commercial development with some retail lots and office space, possibly with some form of hospitality operation to anchor it, he said. 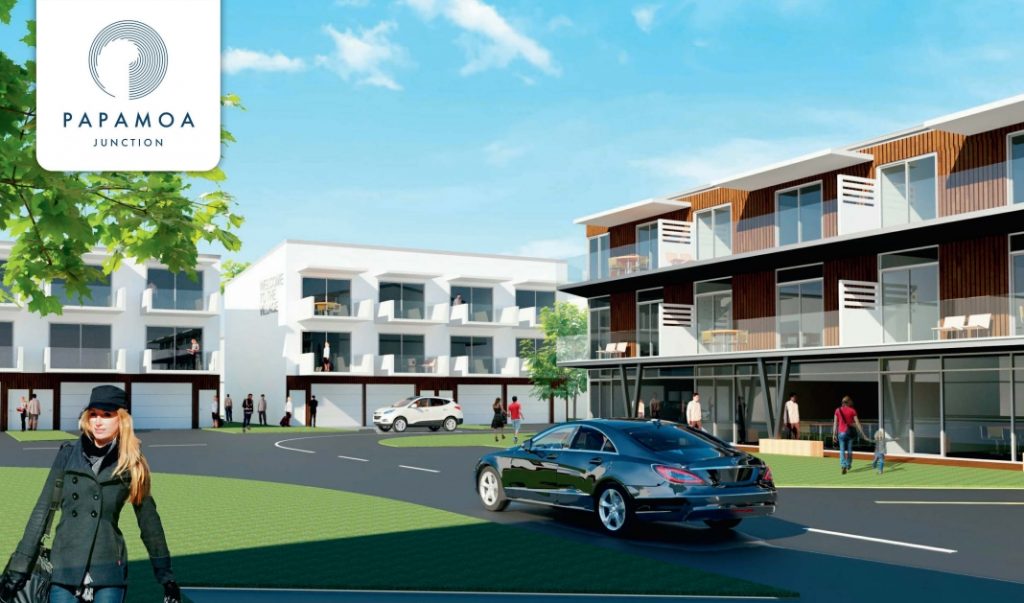 Scott Adams says earthworks are underway and should have been completed by Christmas with civil works commencing in New Year 2021, with titles in October.

“People can expect a high level of amenity with a Carrus subdivision,” he said. “Papamoa Junction will be no exception with a high calibre of development standards, landscaping, walking and cycle connections.”

Greg Watters, Chief Operating Officer for JMC Civil Construction, said Papamoa was generally sandy country. The good side of that was that it was nice material to do earth works with, he said, but when the Spring winds get up, it posed a risk from an environmental aspect.

“That’s the real challenge, the wind,” he said.

The contract has been awarded as two parts: for the initial earth works, which JMC aimed to finish before Christmas, and then the civil engineering works.

“There is a fair bit of interest from the local community because people have been seeing it sit here for a long time and wondering what will happen here,” said Watters.“It’s deemed to be a fairly high-profile project.”

Karl Mischewski is the Sustainability Manager of Gull Group, which has had a station on the site for several years. “We were the first cab off the rank several years ago and built when it was an orchard,” he said.

“I guess we were the first to see the potential to go ahead in Parton Road way back when. At that time we looked at the future growth strategies for Papamoa and came to the conclusion that it could eventually become the Bay of Plenty’s third-largest city.”

Gull leased the site off Carrus originally, and now they were dividing and selling it, Gull would be looking to acquire the site, said Mischewski. “We had the confidence to go ahead when there were just a few shops down at the beach,” he said.

“I recall us taking out the trees to develop the site, which was surrounded by paddocks. We can certainly see what’s happened since then. The Parton Road development is just a sign of the growth that is occurring in this desirable region.” 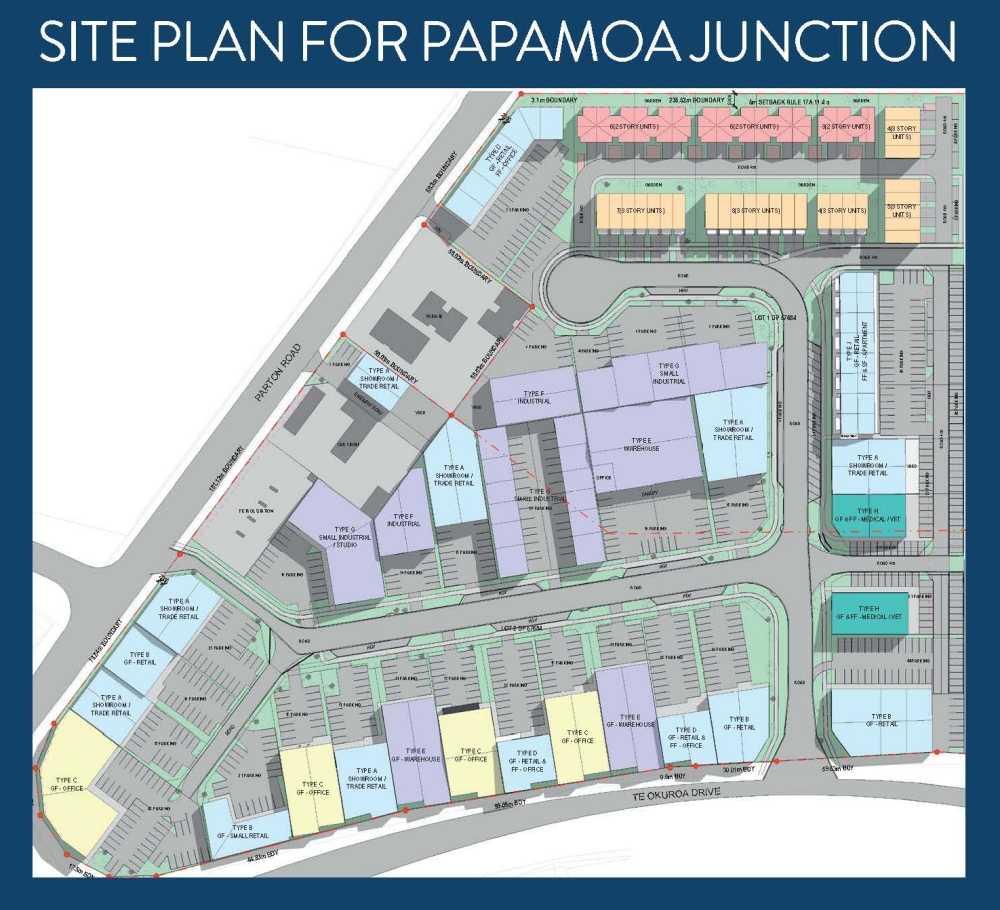 Rates rebalancing is looming for Tauranga