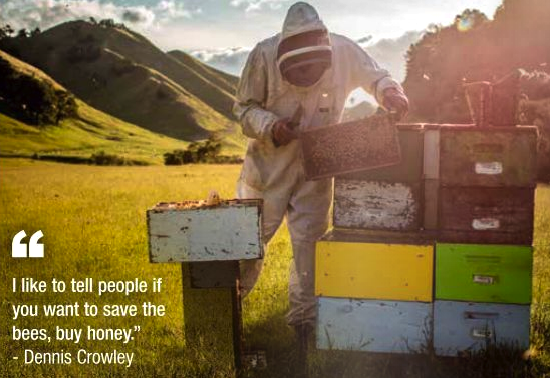 A 10 percent slide in beehive numbers over the past 12 months was the source of some alarm when the story recently broke.

However, the slide isn’t a cause for major alarm among local apiarists compared with colony losses experienced in many overseas hives, said Bay experts.

In its annual colony loss survey Ministry for Primary Industries (MPI) identified a 10.2 percent loss in hives for the year, up slightly on the 9.7 percent loss experienced in 2017 and 9.6 cent loss in 2016.

Almost two-thirds of hive losses were attributed to the deaths of queen bees and varroa, while wasps and suspected starvation accounted for a further 20 percent of losses.

But Apiculture New Zealand Bay of Plenty president Dennis Crowley cautioned the data needed to be viewed in context, with the majority – 89 percent – of respondents representing small scale non-commercial beekeepers. Typically such operators will have a maximum of 50 hives. Larger scale commercial operators running more than 500 hives only accounted for four percent of respondents.

New Zealand is estimated to have more than 800,000 hives.

“These losses happen regularly every year, and in some cases can be as high as 25-30 percent of hives, and it can depend a lot on management style,” said Crowley.

“You also have to remember, we are dealing with biological systems and insects here, and sometimes queens do die, for no other reason than they just die.”

Crowley, who is a commercial beekeeper, said his greater concerns about hive health in the Bay of Plenty revolved around the lack of food reserves for bees and the extra number of hives being stocked through the region.

“Overall our bee problems in New Zealand are not as great as in some countries. But hobbyists do tend to still be growing in numbers, and beehives have become like the new chooks for the backyard. I like to tell people if you want to save the bees, buy honey.”

A lack of variety in pollen sources in the Bay was a perennial problem for commercial beekeepers.

With mono-cultural kiwifruit orchards and pastoral farms that often only offered clover as a pollen source, life for bees in the Western Bay could be tough for long periods of the year.

“In the Eastern BoP we tend to find there is more variety,” said Crowley.“But add in overstocking in the rest of the region and low pollen supplies, and the pressure is there.”

He urged orchardists to learn more from the Trees for Bees initiative that Federated Farmers helped start. It provides insights on types of trees and plants to grow in disused parts of farms and orchards that provide alternative food sources for bees.

“Kiwifruit pollen is not a preferred food source for bees, they tend to go off it after a couple of days, so some variety is always a good thing.”

Barry Foster, chair of the NZ Colony Loss Survey group, said the leading causes – including queen death and varroa – were all similar to previous years’ surveys. They highlighted the need for ongoing education and research into critical bee health issues.

“The survey is a critical tool for our industry as it helps us gain a better understanding of trends and emerging challenges around colony losses,” said Foster.

“This helps steer the direction of further research and other actions needed.”