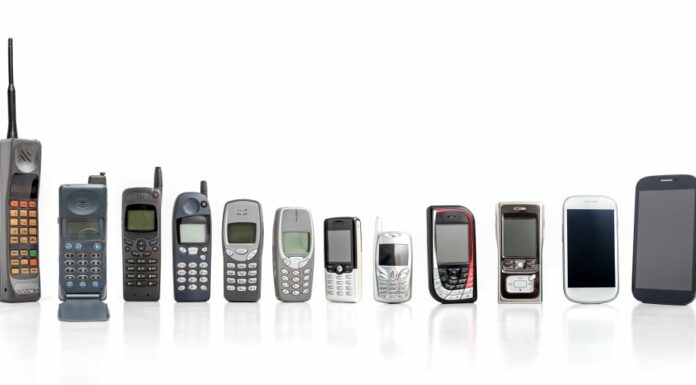 The original mobile telephone weighed in at impressive 2kg and was first demonstrated in 1979. The first commercially available handheld, the DynaTAC 8000x was not available until 1983.

The four-year gap seems somewhat pedestrian given the speed to market of modern tech products. I guess that gave them time to ‘get it right’ and ‘sort out the bugs’, rather like the time you need to develop and launch a Covid vaccine – but that’s another story.

The 1990’s: what heady days they were. Brick in hand, shoulder pads in place and Bollinger flowing, business lunches will probably never end so late-in-the-day again.

The names may have changed, Motorola and Blackberry have been supplanted by Apple and Samsung, but the song remains the same.

Funny thing is, you didn’t actually need to use the mobile phone, you just needed to be seen with it and to occasionally fake an extremely important incoming call. An elaborate song and dance evolved around the façade of appearing to be a mobile-equipped VIP (Very Irritating Person).

But that first mobile phone let the genie out the bottle, and as we know, you can’t easily get the toothpaste back in that bottle [sic].

Fax machines suddenly flourished in business in the ‘80s, then declined as quickly in the ‘90s replaced by email, computers and printers – oh how quickly we forget.

The now ubiquitous cell phone has not fallen victim to such a meteoric fall-from-grace. On the contrary the mobile has evolved and morphed from a phone-calling device to a, “do-absolutely-everything-you-can-think-of, and-then-even-more-stuff, device”.

The names may have changed, Motorola and Blackberry have been supplanted by Apple and Samsung, but the song remains the same. Hardly surprising that the biggest job confronting auditors for NASDAQ superstars like Apple is checking the correct number of zeros at the bottom of their reports – trust me, it’s so easy to absent-mindedly transpose a billion and a million. There’s money in mobile.

And all the while the fax machine can still only send faxes. Sad.

Why, oh why then, given the ubiquitousness of the mobile phone, is it impossible to get a millennial GenZ’er to phone their grandmother or clear their voice mail messages? What part of cell phone (if you take away the cell part) do they not understand? And ‘no, Gran doesn’t want you to DM her – She doesn’t do DM’.

Virtually everyone nowadays has a mobile device. We can Uber, Ola, Holla, Tweet, swipe, post, friend, defriend, txt, IG, FB, WhatsApp, like, unlike, slack, follow, unfollow, pay, Afterpay, Paypal, filter, stream, cast, share and then ghost – you can even have blue teeth and make videos with a clock in the clouds.

So, what are we supposed to eat?