Given the challenges of 2020, introducing a new ride was not something Velocity Valley had expected to do this year, said Guptill.

However, the support Velocity Valley had received from domestic travellers meant the time was right to introduce the new ride before summer, she said.

“Thankfully, with 70 percent of our normal patronage being domestic visitors, we have managed to buck the trend and mostly keep at that same level of customers following the lockdowns,” said Guptill.

The V-Force will see people launched 45 m straight into the air attached to bungy cords at speeds of up to 80km per hour.” – Debbie Guptill 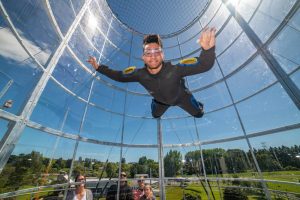 “The V-Force will see people launched 45 m straight into the air attached to bungy cords at speeds of up to 80km per hour,” said Guptill.

“V-Force offers our customers even more selection when it comes to choosing rides at the park – whether they’re after something mild or wild on terra firma or above it,” she said.

In addition to the V-Force, the park’s Freefall Xtreme has also been upgraded with a giant 4.8m high transparent indoor cylinder, providing flyers with both an indoor and outdoor flying experience.

Powered by a 1,000 horsepower, Detroit V16, twin turbo-charged engine, Freefall Xtreme provides the thrill of skydiving but without the parachute or jumping out of a perfectly good plane.

Debbie says the latest ride and the upgrade are perfectly timed for their summer holiday season, which they are expecting will be busy.

“It’s been amazing to see Kiwis enjoying their own backyard, and we’re thankful for the support we have received – we hope our customers will love the new V-Force.”

Velocity Valley is one of many Bay of Plenty operators that we plan to cover in the coming year who have segued into providing new products for the domestic market.